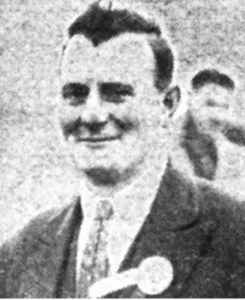 Wallace Jones was born in Cinderford in March 1894, the son of a grocer, Edwin Jones. He had 8 siblings two of whom died at a young age. Wallace left school in 1909, aged thirteen, to become an apprentice baker. The 1911 census lists Wallace working as a woodman on the Crown Estate. Soon after he moved to Aberdare to work in one of the Powell Duffryn collieries.

In 1914, at the start of the First World War, Wallace joined the Royal Welsh Fusiliers and served with them in France and Belgium. He was awarded the Military Star for getting an important message across a heavy enemy barrage of shell and machine-gun fire (after nine previous attempts by other army personnel) to the Commanding Officer of the Cheshire Regiment at La Boiselle, France. Later, as Lance Corporal, he rendered invaluable service to ration parties as a guide, directing them to newly won positions, in darkness, through heavy shell fire. In December 1916, Wallace with a group of six other men was buried by a shell explosion and was the only one to survive. He was invalided home to England. He was then was billeted to the Labour Corp where he was promoted to the rank of corporal.

Wallace married Hilda Merriman on 10 October 1918 and would go on to have four children Evelyn, Iris, Cyril and Helen. He was discharged from the army on 13 May 1919.

In response to the grievances of ex-servicemen, several veteran organisations were established towards the end of the war and organised campaigns around issues such as profiteering, back pay, pensions and employment. The National Federation of Discharged and Demobilised Sailors and Soldiers (NFDDSS) formed several branches in the Forest of Dean. Maurice Woodman was President of the Cinderford NFDDSS and Wallace was Secretary.[1] In October 1919, the NFDDSS joined forces with the Labour Party to contest seats in local elections in Gloucester.[2] In 1921, the various ex-servicemen’s organisations combined to form the British Legion and subsequently Wallace was one of the founders of the Soldiers and Sailors Club in Cinderford.

In the 1920s and 1930s, Wallace became involved with Cinderford Amateur Football club both as a player and, in 1932, as Secretary of the club. He was also a football referee and first Chairman of Hilldene A.F.C. He was Secretary of Oak Leaf Cricket Club. Wallace also organised sheepdog trials in the Cinderford area.

After his demobilisation, Wallace worked for a short time in a local timber yard before joining the Eastern United Colliery where he remained for 30 years in roles that included trammer, road repairer, face worker and then for sixteen years as a master haulier.

Over the next fifteen or so years, Wallace had to face up to the struggle and poverty associated with the three-month 1921 Lock Out, the nine-month 1926 Lock Out and the depression in the early 1930s. As a result, he became active within the Forest of Dean Miners’ Association (FDMA), which was the trade union representing the Forest of Dean miners, and sought to improve the work conditions for his fellow workers. Consequently, he was elected onto the pit committee at Eastern United and the FDMA Council. Wallace and John Williams, the FDMA agent, became convinced that conditions for the workers at Eastern United could be improved if they rid the colliery of the butty system. Eastern was the last pit in the Forest to use the butty system and was unpopular among the men as was the case for Forest miner, Alan Drew:

“Three shifts – one man in charge of each place. All money earned was paid out in the butty man’s name and then he shared out – they were sub-contractors, taking on the job of getting coal out and hiring men. But it wasn’t the men doing the work who was getting the money, the butty men had the biggest helping. The system wasn’t liked”.

“As a result of his activities in organising opposition to the Butty System he was sacked…. and throughout he gave signal service to the union of this district. The credit for this success belongs mainly to Mr Wallace Jones.”

In 1939, Wallace was elected as Secretary of Cinderford Labour Party. At the start of the war, Wallace worked closely with John Williams to establish a vigilance committee in Cinderford to watch over the interests of the public and to scrutinise profiteering and corruption.

In April 1940, the government established a National Coal Production Council made up of representatives from government departments, the MFGB and MAGB. In May Williams helped set up a Forest of Dean Coal Production Committee with owners and workers representatives to discuss ways of increasing output in conjunction with the pit committees. The FDMA representatives were Wallace Jones (Eastern), William Jenkins (Cannop), Harry Morgan (Princess Royal), Ray Jones (New Fancy) and Harry Barton (Northern).[3] The committee agreed to urge the men to avoid unnecessary absenteeism and for those who worked the 2 pm to 10 pm shift to work a sixth shift on Saturday afternoon. The committee also agreed to urge the men to work through the summer without taking a holiday.[4]

The leaders of the MFGB toured the country and holding public meetings on the issue of how to increase the production of coal for the war effort in solidarity with the Soviet Union who were fighting the Nazis on the Eastern Front. In July, a series of meetings were held across the Forest of Dean arranged by the Ministry of Information.  Two meetings were held on Sunday 27 July; the first at the Barn, Cinderford chaired by William Ellway and the second at the Camp, Soudley chaired by Wallace. The speakers were Will Paynter from South Wales Miners Federation Executive and Communist Party member, Charles Gill, the miners’ agent for Bristol, E J Plaisted from Bristol City Council, an ex-South Wales miner who was blacklisted after 1926 and John Williams.[5]

Since the Anglo-Soviet pact, the strength of the Communist Party of Great Britain (CPGB) both locally and nationally was growing and its national membership was on the way to its peak of 50,000 at the end of the war. Its main strength was within the mining and engineering trade unions, especially in South Wales and Scotland.[6]  Communist officials within the MFGB, such as Arthur Horner and Will Paynter, wielded considerable influence over their members in reducing industrial unrest and pushing for higher productivity.

At this time, a small number of miners in the Forest of Dean, including several members of the FDMA Executive, were members of the CPGB. Some Labour Party and FDMA members continued to be sympathetic to the communists and some moved between the two organisations. Some Labour Party members advocated that the Labour Party should allow the CPGB to affiliate whereas Wallace was against it. The debate was reflected in a series of letters in the Dean Forest Mercury in which Wallace argued:

By September 1943 Wallace was elected to the role of FDMA representative on the Forest of Dean Mining Safety Board. In March 1946, Wallace issued a statement to the Gloucester Citizen:

“A lot of hot air has been allowed to evaporate over coal production and the reason why sons do not follow their fathers’ footsteps and enter the mining industry as a career. As the Inspector of the Forest of Dean Safety Board, may I be allowed, to place before your readers the following facts. There are employed in the Forest coalfield approximately 4,000 men and boys, and the following is an accurate, detailed casualty list for the year 1945; of accidents which occurred, in the Forest coalfield: Fatal accidents, 2: reportable accidents, which means very severe injury, or fractures, 381: minor accidents, which meant the loss of or more days, 666; Of these latter 150, occurred at one colliery. To add to this, men are now on an average six years older, with the meagre rations and war strain, is it to be wondered that coal is becoming scarce, and output diminishing. The only answer to more production is (1) Make conditions safer and more attractive; (2) Do away with the present method of payment; (3) Let the miner have a better variety of food especially meat and fats. If we can afford to feed Wasfs, Wrens, and A.T.S. personnel with such rations as has been disclosed recently in the Press, surely the miner, who is standing up to such a casualty list as I have quote, should be equally as well-fed as the Servicewomen.”[8]

On Thursday 19 February 1948, a special event was held at Davis’s cafe to pay tribute to Wallace for his ten years’ service as Secretary of Cinderford Labour Party. Thanks were expressed to Wallace for his contribution to the growth of the Cinderford Labour Party over the last ten years to become one of the strongest in the West of England. After a meal, a presentation of a briefcase was made to Wallace by the Chairman, Stanley Hale. John Williams was among those who thanked Wallace and said “Wallace Jones was worthy of all their tributes paid to him and wished him the best of luck”.[9]

In 1950, he briefly held a role at Lightmoor colliery before returning in 1951 to the Eastern United Colliery as checkweighman. His mining career continued when he gained further promotion. First in 1955 as Acting Manager at Speculation 2, a small mine and the following year as Deputy Manager of Northern United Mines. Wallace retired in 1960.

Wallace was respected for his voluntary work with hospitals. He served for over forty years on various hospital boards and on the management committees of Gloucester and Dilke hospitals.

He also held the following positions – County Councillor for Cinderford, Member of the East Dean Rural District Council and Chairman of the Housing Committee.

Wallace enjoyed gardening, especially tending roses. The Council tribute at the time of his death in 1971 stated “Wallace was a forthright and blunt campaigner, a man who lived for his community work. It was to him his life. Whatever he did it was always with a sincere desire to help people and in particular the people of this parish.” His nickname was ‘Mr Cinderford.’

Thanks to Sheila Bowker who is Wallace’s granddaughter and to Sue Burgess and David Jones (Wallace was their great Uncle) who have contributed to this article.

[1] Woodman joined the Gloucestershire Regiment in 1915 but was discharged in August 1916 due to sickness. He worked as a colliery clerk and was a proprietor of the Temperance Hotel in Cinderford.